Man gets doctors note to excuse him from…sex 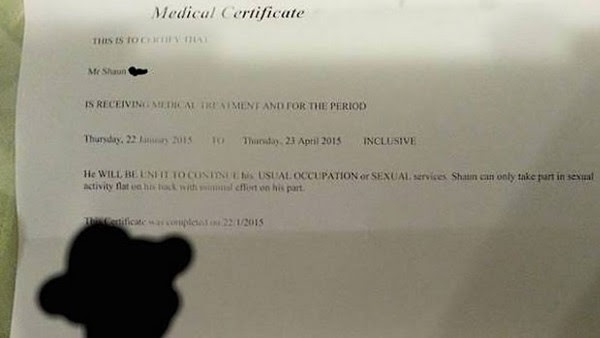 We’ve heard of someone getting a doctors certificate to get out of some strenuous work but this is definitely a new one on us.


Shaun, who was clearly sick of injuring his back at work, decided to get a doctor’s note to ensure that he would be excused for some time from his “usual occupation or sexual services"
We have to ask though, at what stage did he think sex was too risky and decided he needed a medical note to say he must be excused.
We hope Shaun’s wife is as understanding as his doctor.
Just to make it easier for you to read, here is what the note says:
THIS IS TO CERTIFY THAT Mr. Shaun .... IS RECEIVING MEDICAL TREATMENT AND FOR THE PERIOD Thursday, 22 January 2015 TO Thursday, 23 April 2015 INCLUSIVE
He WILL BE UNFIT TO CONTINUE his USUAL OCCUPATION or SEXUAL services.
Shaun can only take part in sexual activity flat on his back with minimal effort on his part.

Breaking News
Posted by GISTS at 16:08