4 hours agoRelaxnews
A new underwater hotel room has opened off the coast of Tanzania for intrepid, adventurous and ocean-loving travelers.
Set off Pemba Island, also known as ‘the Green Island’ in Arabic, guests of The Manta Resort's underwater room are dropped off at a self-contained hotel which literally drifts at sea.
Guests can sunbathe on the top deck of their private island accommodations by day and dine on a lounge deck at water level. By night, they'll then dive into the sea to access their hotel room, where they nod off amongst the fishes and their marine surroundings.
For an ethereal effect, the suite, which is built four meters below the surface, is lit by underwater spotlights to provide a backlit projection of the Indian Ocean’s tropical sanctuary.
Part of the experience also lies in its isolation and underdevelopment as a tourist destination. The most reliable way to access Pemba Island is by chartered flights from Zanzibar. And while interest in the region is growing amongst divers for its unspoiled reefs, the area has yet to be paved by large-scale resorts and tourist crowds.
The suite is designed by Swedish outfit Genberg Underwater Hotels, which opened its first underwater property in a Swedish lake near Stockholm in 2000. The Utter Inn is a single room that lies three meters below the surface and contains twin beds and a table.
View gallery." 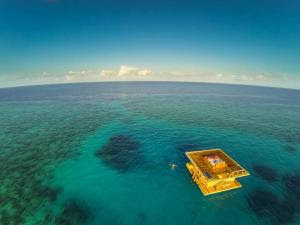 The Manta Resort
Meanwhile, the Manta Resort is the latest underwater guest experience to shake up the hotel industry. While the conventional trend has been to look skyward and snag bragging rights to building the tallest hotel or the highest penthouse, other hoteliers have been looking the other way, designing properties that maximize the beauty of tropical underwater environments.
Perhaps one of the best existing examples is the Ithaa Undersea Restaurant at the Conrad Maldives Rangali Island hotel, which consistently makes it onto travel bucket lists and most exclusive lists.
Set five meters below the surface, the fine dining restaurant features 180-degree views of the coral gardens.
Polish developers have also revealed plans to build an ambitious, futuristic-looking luxury hotel in the Maldives that will be built partially underwater. Reminiscent of the Star Trek Enterprise, the spaceship-like property will be built seven meters above water on five pillars, while the lower deck will be built up to 30 meters below the surface.
Room rates at The Manta Resort start at $750 per person a night.
source- Yahoonews
Posted by GISTS at 10:31 No comments:

A traffic tragedy in which three school pupils were killed in an auto-accident early today on the Lekki-Epe Expreswway, in Lagos, western Nigeria, has created an unprecedented traffic gridlock on the usually busy highway.
The tragedy led to a spontaneous protest by residents nearby and Area Boys. The protesters blocked the entire expressway, making passage in both directions, impossible.
The pupils were trying to cross the road from one side to the other.
No movement: standstill at Lekki-Epe Expressway
A traffic gridlock stretching over 10 kilometres has built up on the road, on the way to Epe, trapping thousands of motorists going to work. A similar gridlock is also on the other side.
Efforts by the police to clear the road has been fiercely resisted by the hoodlums and protesters. Police shot into the air to scare away the protesters, all in vain. There were even shooting exchanges between the hoodlums and the police. An unconfirmed report said one of the protesters was shot dead by the police exacerbating the anger of the community.
P.M.NEWs reporter trapped in the gridlock said the protesters also resisted the attempt by the police to evacuate the killed pupils and the vehicles involved in the accident.
The traffic lockdown which began at about 8 a.m this morning was still on at 10.30 am, at the time of this report.

The Special Enforcement  Unit of Federal Inland Revenue Service has arrested shady businessman, Jimoh Ibrahim, over a tax fraud that runs into N6.8 billion.
Sources within the unit revealed that Mr. Ibrahim was picked up today and is currently under detention at the offices of the agency.
One source says“We are investigating a case where Chief Ibrahim, defrauded the federal government to the tune of N6.8 billion.He is in our custody, we take intend to take a statement from the suspect under caution”,

Another source says that Mr. Ibrahim had been evading agents of the unit for some time but disclosed that they eventually caught up with him in his hotel room in NICON Luxury Hotel where he was arrested this afternoon in Abuja.

Mr. Ibrahim emerged into national prominence under former President Olusegun  Obasanjo, where he was frequently described as an insurance magnate after a questionable sale of the state owned NICON insurance company to Mr. Ibrahim.

He subsequently became a player in the media industry through the controversial purchase of Newswatch magazine and also as a proprietor of Air Nigeria. An airline closed down last year due to safety concerns and Ibrahim’s inability to meet financial obligations to staff, lessors and maintenance engineers and aircraft parts suppliers.

After Mr. Ibrahim’s purchase of Newswatch, the original directors, including Ray Ekpu, accused Mr. Ibrahim of hijacking Newswatch without meeting the terms of acquisition as a majority stakeholder.

His troubles in aviation sector came to light when one of his top level employee, John Nnorom turned into a whistleblower and disclosed to  Saharareporters of the airline’s extensive violation of maintenance standards and financial fraud.

Also, Aersale an aircraft lease company sued him in New York court seeking a huge payment representing Air Nigeria unpaid obligations under the term of the lease.
Mr.Ibrahim is known to have extensive political connection with former President Obasanjo as well top members of the Goodluck Jonathan regime.