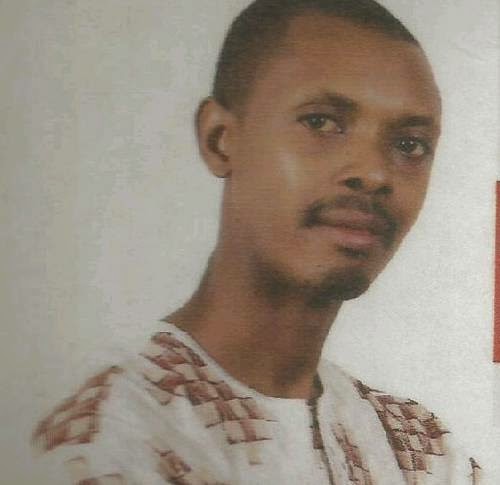 A student of the National Open University of Nigeria, Abdulmalik Sa’idu, has been languishing in a police cell for over 20 days on the orders of the Governor of Katsina State, Ibrahim Shema, for posting details of an alleged fertilizer scam in the state on his Facebook wall, Premium Times reports

This was disclosed to Premium Times by Mr. Sa’idu’s family and lawyer. Abdulmalik was first invited to the Katsina Government House on August 28 by a phone caller who claimed he had a message for him. But when Abdulmalik arrived at the governor’s office, he was promptly arrested, handcuffed and taken to Batagarawa Police Station just outside the state capital, Katsina, and detained on the orders of Mr. Shema’s aide-de-camp, Shehu Koko, a Deputy Superintendent of Police, DSP.

According to his father, Maiyawo Sa’idu, while the young student was not charged with any offence, he was accused of cloning the governor’s phone number and using same to call the state Commissioner for Local Government and Chieftaincy Affair, Sani Makana, with instructions that Mr. Makana deposit N3 million in his account. Mr. Sa’idu said his son was innocent. He said if indeed Abdulmalik cloned the governor’s number to dupe a commissioner he wouldn’t be tricked to come to the Government House to be arrested. “I think they are trying to frame him. I know my son cannot clone the governor’s number and call a commissioner to put three million into his account,” Mr. Saidu told PREMIUM TIMES.

He said Abdulmalik was arrested because he posted details of an alleged fertiliser scam by the governor on his Facebook page. Mr. Saidu said prior to his son’s illegal detention, some officials of the state government had warned his son to desist from criticising the governor on Facebook. On one occasion, the General Manager of Katsina State Road Maintenance Agency, Jamilu Umar, threatened to pay N2 million to thugs or policemen to kill Abdulmalik if he doesn’t stop criticising the governor publicly, Mr. Saidu said. Governor Shema’s Chief Press Secretary, Sani Malumfashi, rejected repeated calls made to his mobile phone after this reporter told him he was calling about Abdumalik’s case.

Mr. Sa’idu said he is worried about the wellbeing of his son after relatives were abruptly stopped from seeing him a week into his being detained. “For the first week they used to bring him out to me. He would eat in front of me and they would take him back to the cell but for more than 12 days now, we have not seen him. They told me that they have a directive from above not to bring him to me,” he said. “The DPO (Divisional Police Officer) told me they have a directive from the Government House not to bring him out for his family or anybody in Katsina to see him.”

Mr. Ajayi said as a lawyer, the governor should realise that he was breaking the law by holding the boy beyond 48 hours on a “frivolous claim.” “The governor is a lawyer, his deputy is a lawyer and the attorney general is a lawyer and they all know that it is wrongful of them to arrest someone and keep him in detention for more than 48 hours on a frivolous claim that the boy cloned the governor’s number and wanted to collect N3 million and some other concocted allegations which are not proven. And they now kept the boy incommunicado. His family cannot reach him, and these days because of the security situation in the north, he could be killed,” he added. Mr. Ajayi warned that if Abdulmalik was not released he was going to send a petition to the National Human Rights Commission and the Inspector General of Police. The DPO of Batagarawa declined to talk to Premium Times after he was asked on whose orders Abdulmalik was being held beyond the 48 hours stipulated by law.

The Police PRO, Abubakar Sadiq, also refused to return several calls after promising to find out the details of the case.

Culled from Premium Times
Posted by GISTS at 00:59