Fracas in Lagos Island as popular politician is killed 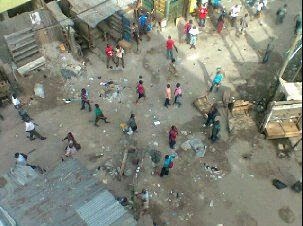 Political campaigns have begun and the first casualty has been recorded in the centre of Lagos politics, the Lagos Island. A popular local politician named Azeez Ashake was shot dead at close range in front of his house at Isale Eko on Saturday September 20th by suspected political thugs.

His son, Usman was also shot but is said to still be alive receiving treatment at an undisclosed hospital in Lagos Island. Azeez Ashake is said to be a strong leader of a particular political group in Lagos Island, and is said to be very influential. His killing caused a lot of chaos in Isale Eko over the weekend, where it's been reported that four people have so far been killed in retaliation for his death.

The police tried over the weekend to restore peace to the area. Several policemen and police patrol vans were deployed to the area, but this didn't stop political thugs from fighting at intervals.