Obesere Rape Victim: They Are Threatening To Kill Me- Lady Cries Out 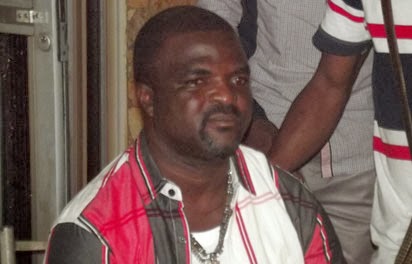 The Lady Fuji musician Obesere allegedly raped has cried put. The 29-Year old business woman says ever since the press published her story yesterday, she has been receiving life threatening calls from them. I am highly frightened, she said.

There were indications, yesterday, that the case involving popular Fuji musician, Alhaji Abass Akande, also known as Obesere, arrested for allegedly raping a 29-year-old business woman, Miss Olanike Olaiya, in his Okota residence may have been  transferred to the State Criminal Investigation Department, SCID.

Sources told Vanguard, yesterday, that the embattled musician preferred the SCID to the  Isolo Police division because the DPO had insisted on the matter going to court.

Normally, it is  the Divisional Police Officer at Isolo Division, Aminu Ibrahim, that should have ordered the transfer of the case to SCID for further investigations.

But Obesere was alleged to have used his contacts in the police to have the case transferred to SCID.

A police source also disclosed that Obesere found it difficult to pressurize the DPO at Isolo into striking out the matter or persuade the victim to accept a settlement.

The source, who craved anonymity, also said Obesere contacted some top citizens to wade into the matter by persuading the DPO to soft-pedal on the  matter but they backed down when they discovered that the police have incriminating evidence against the musician.

Victim relocates to Sagamu for treatment

Meantime, the victim, Olaiya, told Vanguard yesterday that she had relocated to her home town, Sagamu in Ogun State, where she is currently receiving treatment for the rape incident.

Olaiya, who spoke with Vanguard on the telephone, said: “As I speak with you, I am in Sagamu, my home town, where I have been  receiving traditional treatment since the incident occurred.

I bled for more than two weeks —Victim

“I bled for more than two weeks after Alhaji Obesere raped me and inserted his ring into my private part. The incident occurred on February 12, 2013 and I have spent a lot of money treating myself.

“The DPO, Isolo Police division, took pity on me and refused to give in to Obesere’s pressure to  strike out the case and God will bless him for that.

“But last week I was informed that the case had been transferred to the SCID and my Investigating Police Office, IPO, at Isolo asked me to come to the station on Tuesday for the transfer.

“But when I got to the SCID, I discovered the IPO, who took over the case, one Mr. Jacob, I don’t know his rank, became hostile to me.

“You need to see how this man treated me. He started by asking me to write a new statement and when I tried to explain that I had written a statement at Isolo division, he rebuffed my explanation and insisted I wrote a new one.

They threatened to kill me

“Afterwards, they started threatening me. The IPO, Alhaji Obesere, and some of his brothers, who were present there, asked me to stop the journalists from publishing my story and if I don’t, I will be a dead person.

“I was so frightened when they said this and each time my phone rang someone would pick it up to know who was calling.

“Later, they discovered  I wasn’t going to break, then they started begging me and promised to take care of me. Alhaji Obesere even said he was going to take me to the best hospital for treatment.

“At the end, I rose to leave and they offered to drop me in my place. The IPO also insisted that I should follow them. Instead of taking me to my area, they took me to Obesere’s house and the woman who introduced me to him was also there.

“While I was with them I alerted the police at Isolo and told them where I was.

“But yesterday, they called after they saw the publication and started threatening again to kill me.

“I am highly terrified, that was why I travelled back  to my home to get some treatment.”CULLED
Posted by GISTS at 02:40