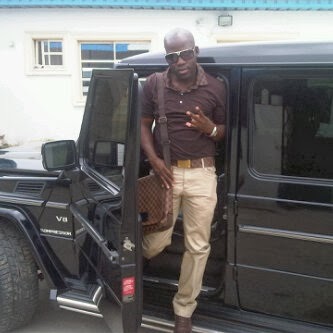 Notorious drug baron, Rafiu Akanbi Elele is currently standing trial in court in the United States, over multiple suspected cases of drug trafficking. The controversial socialite and a dye-in-wool fan of Fuji Czar, Wasiu Ayinde Marshal was arrested in Lagos and extradited to the United States of America, USA, by officials of the International Police Force, Interpol. Before his arrest, Elele had been on Interpol's most wanted list for so many years. His eventual extradition was fallout of eight years of frantic searching, investigation and surveillance by Interpol.
The ELITES that Rafiu Elele has been singing like a canary to the Interpol. He is alleged to have quite a number of prominent Nigerians, who ran the drug cartel with him. It is gathered that the severity of Rafiu Elele's crime may earn him between 10 to 12 years in jail.
Elele gained notoriety as a formidable kinpin of the illicit drug cartel in Chicago. Although, he is barely taller than a dwarf, Elele dominated the drug cartel in Chicago for so many years, like a collosus. He was known to have controlled a large cartel of the drug business for so many years before the bubble burst on him. According to sources, the genesis of Elele's trivial began in 2005, when the drug law agents in
Chicago were alerted of his illicit involvement in drug business. It was gathered that an epidemic of drug-intake related disease broke out in Chicago during that time. This was later traced to some of the hard drugs being sold by Elele's boys to junkies. Before long, the Chicago drug law agents realised the severity of Elele's involvement in drug business and thus, decided to put a stop to it. Consequently, most of his boys and business associates were arrested, put to trial and sentenced to jail. Notable among those who was jailed was Akinyemi Akingba, a close friend and business associate of Rafiu Elele.

Surprisingly, Elele could not be nabbed during the raid. However, he came so close to being arrested by the police, but he escaped in a manner which defiled natural logic. It was gathered that the Chicago police had acted on a tip off that the diminutive man was at Kato African Restaurant located on North Clark Street and Touhy Avenue, Chicago. Upon arriving at the restaurant, the police searched for Elele, without any success. Somehow, he had managed to escape few minutes before the police arrived at the venue.
Faced with the reality that his stay in the US could no longer be guaranteed since the US police was determined to nail him, Elele decided to relocate to Canada.
Upon his arrival in Canada, a country, whose drug laws is still evolving; Elele saw a more enabling environment for his dealings. Before long, his coast of infamy as the baron of illicit drug trafficking in and out of Canada began to expand. While in Canada, Elele lived in Brampton, Toronto. It was gathered that many asylum seekers facilities in Canada became his major channels of operation.
The Canadian drug law enforcement agents were later alerted of Elele's growing drug activities and they promptly made a move to arrest him. But just like what happened in Chicago, Elele escaped under a mysterious circumstances. It was gathered that he was at an African restaurant when the police arrived. But he was snuck to the store of the restaurant and hid in a sack of gari( Cassava flour). And how Elele found himself in South Africa is a mystery that keep eluding many people till date.
During his sojourn in South Africa, Elele also practised his drug trade. But his stay in SA was brief, because by now, he was being haunted by two countries-the United States and Canada for alleged drug related offences and money laundering. By the time he finally left SA and relocated to Nigeria, the diminutive drug baron had got the attention of the Interpol as a person, who must be brought to book.
It was gathered that when Elele settled down in Nigeria, he refused to severe his ties with the drug business. And he was reported to have court the angst of some of his associates, whom he cheated in the drug business.
Elele's greatest undoing later turned out to be his refusal to settle some of his associates, who had helped him to facilitate the sale of a landed property. Elele was alleged to have reneged on the agreement to pay these guys of their ten percent commission. Irked by this act of greed as displayed by Elele, the aggrieved party alerted the Nigerian Drug Law Enforcement Agency, NDLEA of his dealing in drug trade in the US and Canada.
It was gathered that after much investigation, the NDLEA confirmed the veracity of the claim. Subsequently, Elele was arrested and detained at the agency's office.
Apparently, the aggrieved group was bent on sealing Elele's fate. This is because it got in touch with a lady, whose younger brother was one of Elele's boys, serving jail term in the US, and informed her that Elele was in NDLEA's custody. This unidentified lady was reported to have called Interpol and furnished them with information about Elele's whereabout. Pronto, the Interpol was said to have dispatched some officials to travel down to Nigeria and arrest Elele.
It was gathered that the Interpol arrived Nigeria, stated the reasons for their mission and asked that Elele be released to them. At this juncture, Elele's family and a few of his friends, who had, hitherto, treated his arrest by NDLEA with a kid's gloves, made an effort to foil his arrest. But their efforts turned out to be furtile.
Elele was finally handed over to Interpol and he was flown to the US, where he will be tried and sentenced to jail. The diminutive socialite, was reported to have wept and wailed throughout the flight to the United States.