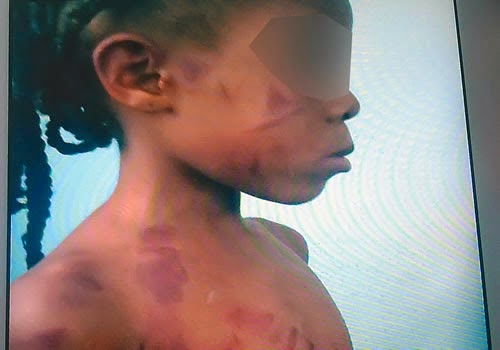 An 18-year-old girl and mother of one, Kate Ajie, has been arraigned before a Rivers State court over assault and child abuse to her five-year-old daughter, Divine.

The 18-year-old mother was said to have seriously beaten her five-year-old daughter to the extent that a concerned neighbour who accused the mother of constant maltreatment had to involve the police by taking the girl to the Divisional Police Officer, Mohammed Suleiman Baba on February 21.

The 18-year-old Kate who is the only child of her parents revealed how she had the child for her an unwanted lover, how her mother died of breast cancer and her father remarried.
Narrating her story “I stopped schooling when. I was impregnated against my will in 2008 by one boy called Godstime in my village at Ogoni. He was doing nothing when he impregnated me.

“At that time, I left my mother in Bonny and went to my village selling orange and banana duringholidays. Godstime came to buy an orange from me but he didn’t take it, saying he would come back for it as he wanted to see someone.
“When I didn’t see him, I traced him with the orange and took it to the compound that was pointed to me as his place of abode. As I gave him the orange, he put it in his pocket and brought out a white handkerchief and shook it at me. Dust-like particles came from it and that was the last I could remember, as he camped me in his room for two months.

“My people were searching for me but didn’t know where I was. It was my uncle’s wife who discovered me and carried me out of Godstime’s room back home. It was when I came to my senses that I knew what happened.
“That was how I got pregnant without me knowing, though he already knew. I left Ogoni for Bonny to stay with my mother. I told my mother that something was turning in my stomach. She laughed and took me for a test which indicated that I was pregnant. I was surprised because I was still menstruating. I went back to my village where a girl narrated all that happened to me when I was hypnotised.

Kate also narrated what led to her beating her daughter she said: “I came back from work on the fateful day and was told that my girl took two children to a main road to play. The mother of the children was shouting so much over the issue that I became confused and frustrated.
“I wanted to flog my daughter on her buttocks but the way she was hollering and jumping about got me angrier. That was why I flogged her all over her body.”

Kate who begged that she forgiven she she was ready to turn a new leaf and take care of her child properly.
However the chief magistrate instructed that Kate be rehabilitated and the young child put in aschool.