Caught on CCTV: The horrific moment father beats up emaciated 'slave' he kept in the family garage

These shocking images reveal one of the violent beatings Craig Kinsella endured at the hands of a family who forced him to live 'like a slave' in their garage, scavenging for food.


Ice cream business owner David Rooke, 44, his wife Donna, 40, and their 19-year-old son Jamie, subjected Mr Kinsella to a six-week campaign of 'unpleasant and casual' violence, treating him 'like a dog' at their Sheffield home.
Mr Rooke was today jailed for six-and-a-half years after admitting falsely imprisoning and attacking Mr Kinsella.
His wife was jailed for four months, while the couple's teenage son was sentenced to four years in prison.
Scroll down for video 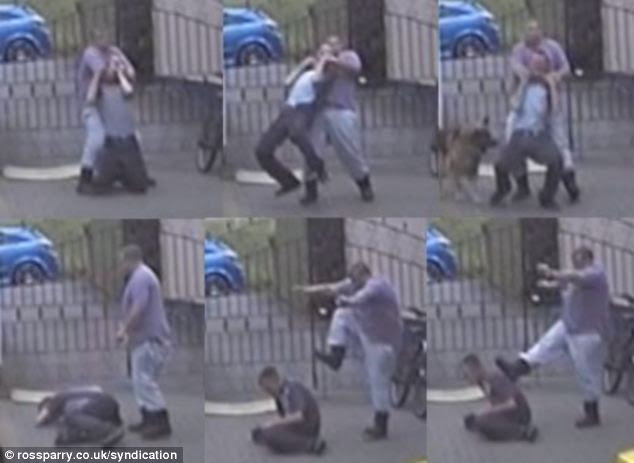 CCTV captures David Rooke beating Craig Kinsella, grabbing him in a head lock, before kicking him as he cowered on the ground. Rooke, along with his wife Donna and son Jamie have been jailed for keeping their victim as a slave 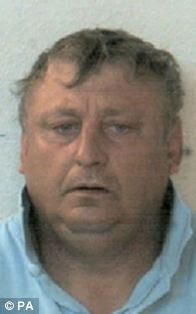 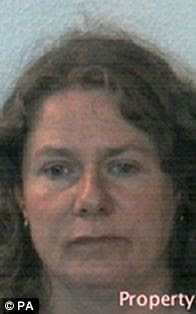 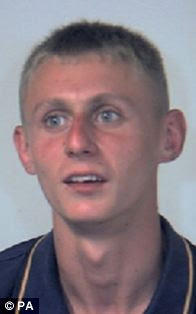 David Rooke, left, his wife Donna, centre, and their son Jamie, right have been jailed for keeping Craig Kinsella as a slave at their Sheffield home for six weeks
Mr Kinsella endured blows from pick-axes, spade handles and a crow bar, was forced to use a bucket for a toilet and made to work for no pay.
The family's campaign of terror, exposed by police in July last year, left their victim so terrified he would work from 7.30am to midnight cleaning the garden and vans, receiving no pay in return.

Judge Peter Kelson QC, sitting at Sheffield Crown Court said it was impossible to watch the CCTV footage without wincing.
He said it was 'staggering' this could happen in modern society, adding the family treated their victim like a 'punchbag'.

'He was just your punchbag, all three of you. If you were in a bad mood you would just go and kick and punch Craig Kinsella'

He ordered Mr Rooke to pay Mr Kinsella £15,000 in cash, that was discovered by police officers raiding the family home.
Judge Kelson said: 'Quite clearly this in no way reflects the pain and suffering inflicted on Craig Kinsella but it’s better than nothing.
'His will had been completely broken by the way you treated him. You treated him like a dog. Man’s inhumanity to man never ceases to shock.'
The judge added: 'He was fed very little - fed by way of food left out. He was kept hungry. He was constantly beaten and battered.
'He was just your punchbag, all three of you. If you were in a bad mood you would just go and kick and punch Craig Kinsella.
'It is staggering that this is happening in our society, absolutely staggering. It is almost unbelievable.'
Shocking CCTV of family assaulting 'slave' Craig Kinsella 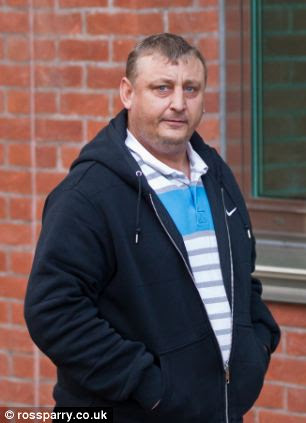 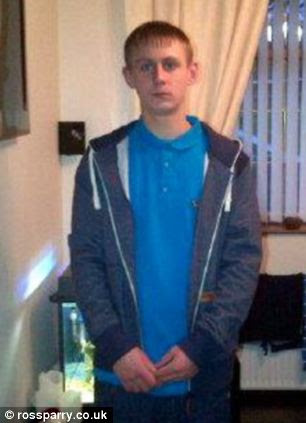 David Rooke, left, was sentenced to six-and-a-half years in prison for falsely imprisoning and attacking Mr Kinsella. His son, Jamie, right, was jailed for four years for affray and causing actual bodily harm

Judge Kelson told David Rooke: 'He was under your control.
'He was treated horrendously. He was treated like a dog. The conditions were grotesque and you were just exploiting him.
'This was two months of horrendous violence. One could not watch the CCTV without wincing repeatedly. You made him your punchbag.'
Judge Kelson concluded his sentencing remarks saying: 'The hatred is simply immeasurable.'
Commending South Yorkshire Police, Judge Kelson, said: 'My fear is that there are more of these cases about and we are now only beginning to discover them.'

Mrs Rooke was jailed for four months after admitting a count of battery
Mr Rooke admitted false imprisonment today and a number of counts of causing actual bodily harm.
Jamie Rooke admitted affray and a number of counts of causing actual bodily harm, while Mrs Rooke admitted a specimen count of battery.
When Mr Kinsella was taken to hospital he was found suffering from a broken right arm, a fractured rib, extreme bruising to his back and around his kidney, a fractured chin and cuts, and lumps and bruises on his head and legs.
Prosecutor David Brooke told the court how Mr Kinsella lived in the garage at the side of the family home for about six weeks before police intervened in July last year. He was not allowed into the house.
He said the victim’s life was completely controlled by the Rookes using casual violence and intimidation.
Mr Brooke said one neighbour told police: 'He was like their slave. They talked to him like a dog.
'They used ‘horrible’ words. He never retaliated.
'He went on to explain that he'd been living in the garage and that he'd slept on a piece of carpet and used an old curtain as a blanket.
'He wasn't paid by the family nor fed regularly and he regularly picked food from the wheelie bin to eat. He was obviously emaciated.'
Mr Brooke said the victim initially told officers he deserved one of the beatings because he had been stealing food from a wheelie bin.
He said Mr Kinsella began to work for the family a number of years ago and was paid £40 a week so he could keep claiming benefits.
But the Rookes took him to the post office to withdraw his money and took control of his finances, the prosecutor explained.
He had a flat in the city and was occasionally driven there to have a bath, although the prosecutor said it was in a terrible state. He was spotted washing his few clothes in a bucket.
Mr Kinsella eventually told police what happened to him after officers were called to the bungalow following an incident in which Jamie Rooke produced a knife during an altercation with a neighbour.
Mr Kinsella was taken to hospital after an officer spotted a range of injuries and he eventually told his story. 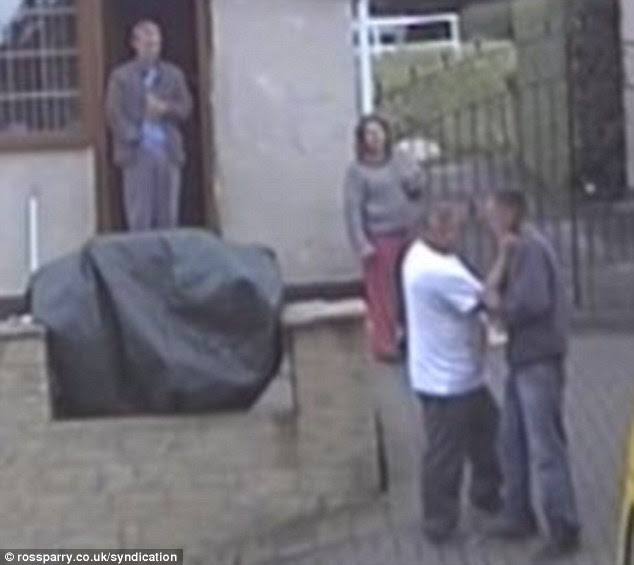 Mr Rooke is caught grabbing at his victim's throat. Mr Kinsella was forced to live in the family's garage, scavenge for food and use a bucket as a toilet 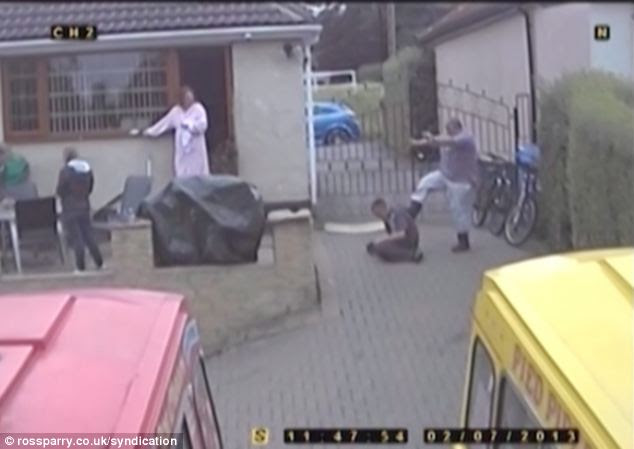 Another shot shows Mr Rooke kicking Mr Kinsella in the back as he cowers on the driveway. The family subjected their victim to a six-week campaign of violence, exposed by police in July last year Mr Kinsella is held in a head lock by a Mr Rooke. The family used pick-axes, crow bars and spade handles to attack their victim

Mr Brooke said Mr Kinsella told police he was regularly threatened by David Rooke who told him he would be a 'dead man' if he escaped.
He said Rooke told the victim: 'I'll hunt you down.'
The prosecutor added that Mr Kinsella was clearly scared about whether the Rookes would track him down, even after he was with the police.

Mr Brooke told the court this was a 'disturbing and unpleasant' case.
He said: 'He became what he called a slave - working from 7.30 in the morning to 11 or 12 at night.'
The court heard Mr Kinsella had learning difficulties and neighbours described him as being a bit 'slow'.
Speaking outside court, Detective Inspector Vicky Short, from South Yorkshire Police, said her officers could easily have been investigating a murder.
Ms Short said: 'The physical and mental abuse meted out by the Rooke family on a highly vulnerable man plumbed the depths of depravity.
'David, Donna and Jamie Rooke abused Mr Kinsella for their own pleasure until his spirit and will to stand up for himself and fight back was crushed.
'It is hard to understand how any human being could treat an individual in such a grotesque, callous and inhuman manner.
'I am confident that if we had not received that phone call that day last July we would have been investigating a murder.' The Rooke family home in Sheffield where Mr Kinsella was forced to work for free, and endure regular beatings at the hands of the family 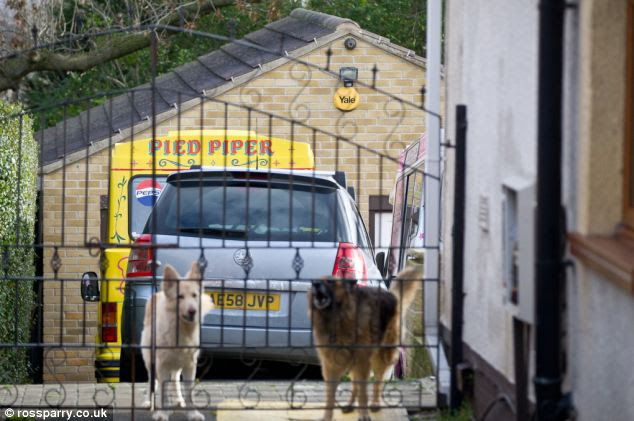 Mr Kinsella was forced to live in the garage, using a bucket for a toilet and eating the occasional cold meal. He worked from 7.30am to midnight cleaning the family's garden and vans but was never allowed inside the house