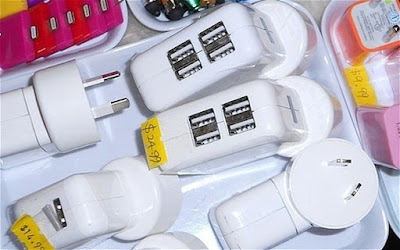 Australian authorities issued a warning about cheap, non-compliant USB-style chargers after a young woman died from apparent electrocution while using a laptop and possibly a smart phone.
ADVERTISING

The 28-year-old was found wearing headphones and with her computer in her lap with burns on her chest and ears at a home in Gosford, north of Sydney.
Police are still investigating the circumstances of the death but the Department of Fair Trading, which has assisted with the case, suggested a sub-standard mobile phone charger could be to blame.
The woman, whom reports said was from the Philippines but had recently become an Australian citizen, had headphones plugged into her laptop, which was connected to a power socket to charge.
"The phone was also plugged into a USB-style charger. That charger had failed," Lynelle Collins from the New South Wales Department of Fair Trading said.

"Somehow power from that charger has connected to her body. Whether she had it (the phone) to her ear or was holding it in her hand, we don't know."

Collins said ideally people should avoid using their mobile phones while the devices were charging, but in any case they should avoid non-approved chargers.

"We are trying to alert people to the concern that sometimes when you buy really cheap chargers, they aren't compliant with... (safety) standards," she said.

Fair Trading said it had removed a number of unapproved and non-compliant USB-style chargers, travel adaptors and power boards from sale in Sydney after the death.

They said the devices did not meet essential safety requirements and were often made of inferior plastics and other insulation materials.

"These devices pose a serious risk of electrocution or fire," Fair Trading commissioner Rod Stowe said in a statement.

Maximum penalties for selling devices that fail Australian standards are Aus$87,500 (US$82,500) and/or two years imprisonment for an individual and a Aus$875,000 fine for a corporation.

The woman's death is the only known fatality in Australia potentially linked with the chargers, but a report from China in 2013 suggested a woman was electrocuted while making a call on a phone that was charging.