ISIS fighter flees to Germany after extremists tried to kill him 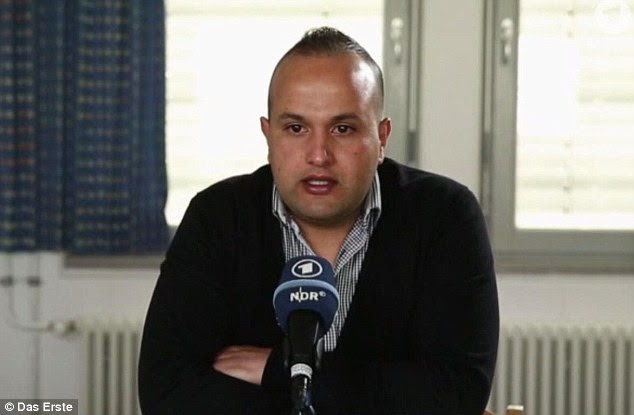 An Islamic State militant who claims he was 'conned' into joining the terror group with the promise of four wives and an expensive car has described the moment he heard a prisoner being decapitated.
Ebrahim B, a German Tunisian, travelled to Syria to join ISIS last year but was captured and interrogated by the terrorists who feared he was a spy.
Speaking from a prison cell in Germany, ahead of a court appearance, he described the harsh reality of the terror group he joined voluntarily.


In August last year, Ebrahim B, from Wolfsburg, found himself locked in a blood-soaked cell in an ISIS 'execution centre' in Syria.
He heard a fellow prisoner being decapitated before the body was dumped next to him, the head placed on top of the torso - the terror group's gruesome trademark.
'It was like the sound of a cat being run over,' he said, according to The Independent.
The dead prisoner, like Ebrahim B, had been accused of being a spy.
However, a recruitment officer vouched for Ebrahim B, and says he was able to escape while taking an injured ISIS fighter to Turkey for medical treatment.
The 26-year-old handed himself in to the authorities when he returned to Germany, and will appear in court today to face charges of being a member of a terrorist organisation, The Independent reported.
He will appear alongside a fellow ISIS-returnee called Ayoub B, 27.
In his only interview from jail, Ebrahim B told Germany’s Süddeutsche Zeitung that ISIS had nothing to do with Islam and he was 'conned' into joining.
He claims he was persuaded to sign up by Yassin Ousaiffi, who at the time was a recruitment officer at Wolfsburg’s Ditib Mosque.
A growing number of foreign fighters who left their homes to join ISIS are now trying to escape from its tyrannical rule.
They are lured to Iraq and Syria under the false impression they will be paid good money, married off and given a position of responsibility
However, the dark reality of living under the terror group's reign soon hits home, according to the Syrian Observatory for Human Rights (SOHR).
As many as 22,000 foreigners are fighting in Syria and Iraq where ISIS controls the vast majority of its territory, a United Nations report claimed.
ISIS has executed at least 143 members for trying to escape since its leader Abu Bakr Al-Baghdadi declared a 'global caliphate' in June 2014, according to SOHR.