Heartbreak that led to Serena's meltdown at Wimbledon last year 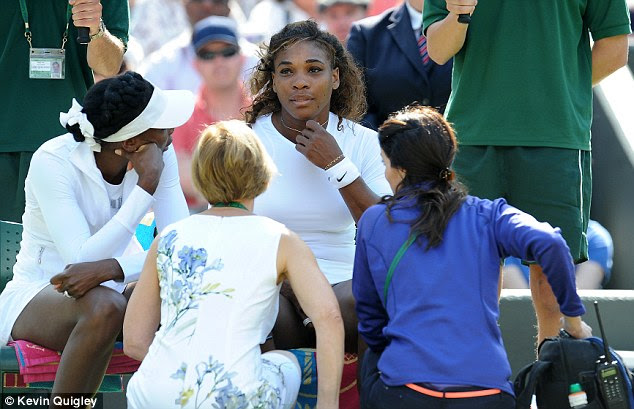 The world’s leading female athlete was almost bouncing off the walls as she walked down the tunnel from Wimbledon’s main player complex to Court No 1.
It was the second Monday of Wimbledon last year and Serena Williams was about to play doubles with her sister Venus, but the unsteadiness on her feet suggested that all was not well.
What happened in the next half hour only confirmed it as the crowd looked on with a mixture of bemusement and alarm. This colossus of any era in tennis, disorientated and bereft of co-ordination, could barely put racket to ball and, with officials and medical staff swarming onto the court, was forced to abandon the match after three games.


Having left the All England Club so ignominiously 12 months ago, the World No 1 has rebounded to the extent that she holds the last three Grand Slam titles and remains largely unchallenged as the world’s best player of either sex. Yet she remains an enigma and, in a crowded field, last year’s episode was one of the most mysterious of her career.
What happened appears to have a connection to the coach who has played a huge part in this remarkable Indian summer, Frenchman Patrick Mouratoglou.
Sportsmail has spoken to several people involved in the incident and they discounted the wilder rumours that there was the smell of alcohol in the air or that she appeared to be under the influence of drugs. The official cause given later by medical staff was a virus. 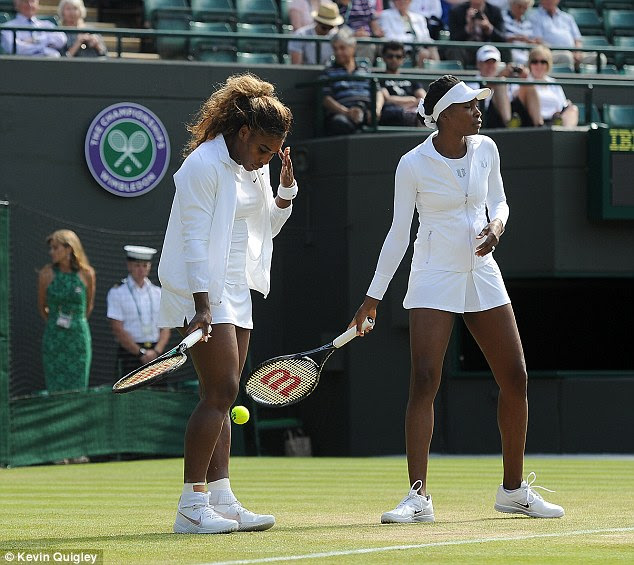 But as one witness pointed out, and it is supported by video evidence, the reaction of her sister Venus is fascinating. It appears to be one of bewilderment and frustration as much as sympathy.
One credible source close to the Williams camp offers a hitherto unaired theory about a major contributory factor to her condition: she had barely eaten in the 48 hours before that match. Lack of nourishment and low blood sugar could explain Serena’s startling lack of co-ordination.
So what could have happened? Two days earlier Serena had suffered a shattering defeat in the third round by France’s Alize Cornet, following a first-round defeat at the French Open four weeks before.
She has admitted often enough that she finds it hard to handle defeat and the fear of it is a massive element behind her extraordinary fighting spirit, seen most recently in Paris where she kept coming back from the brink to take the title. But many believe there was another factor in play 12 months ago. While her professional relationship with Mouratoglou, 45, has endured for three years, the romantic side of it was floundering this time last summer.
According to sources close to Serena they finished their personal relationship twice, either side of the French Open. This turmoil, plus the crushing disappointment of defeats, would have added to any physical ailment affecting her. Serena finally confirmed the split in September.
Interestingly, Williams lost three times last year to the relatively unsung Cornet. After the first of those in Dubai, she gave a public hint about the status of her relationship with Mouratoglou, tweeting: ‘Me. Mine. Alone. Myself. I. One. Solo. Unaccompanied.’ After last year’s doubles match he told reporters he had not seen her for two days. Like a lot her pronouncements, it was slightly cryptic. But then a look at rarely examined statistics in her career shows that withdrawals and retirements are hardly new, if not usually in as dramatic circumstances as at last year’s Wimbledon. 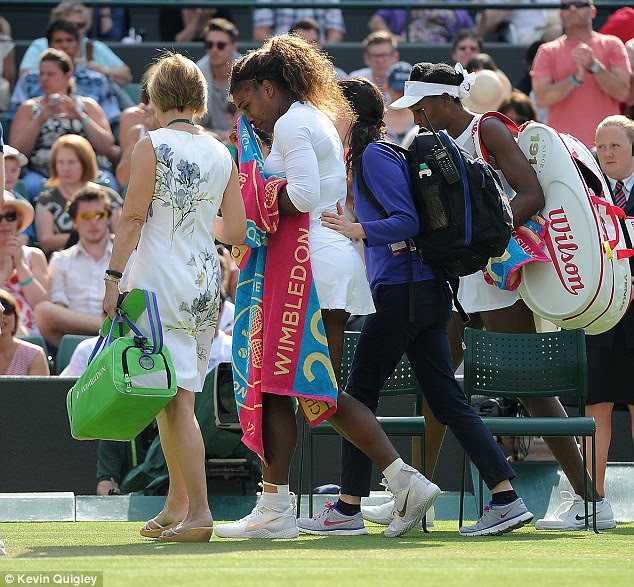 Williams made her professional debut nearly 20 years ago, but has actually entered only 200 tournaments, which makes her tally of 20 Grand Slams even more astonishing.
Also in there is the remarkably high number of matches from which she has scratched or retired.
In those 200 events she has given her opponent walkovers on 15 occasions and retired from matches that have already started 13 times. In doubles there have been nine walkovers and one retirement. Williams’ management of her schedule has produced spectacular results, while her relationship with the Svengali figure of Mouratoglou has been a huge boon for her tennis.
The suave Frenchman is an intriguing enough figure in his own right, let alone when paired with the greatest player in the women’s game. He is from an extremely wealthy family of Greek heritage.
Mouratoglou first came to the game’s attention training Marcos Baghdatis. Having established a tennis academy outside Paris in the late Nineties, he later worked with players including the Bulgarian Grigor Dimitrov and Britain’s Laura Robson and Liam Broady.
While enjoying more success with some than others, there is no doubting his work ethic nor his intense study of the game. In my experience he is unfailingly friendly and well-mannered, always happy to offer some technical insight — but he never talks about the personal aspect of his relationship with Serena and neither does she. 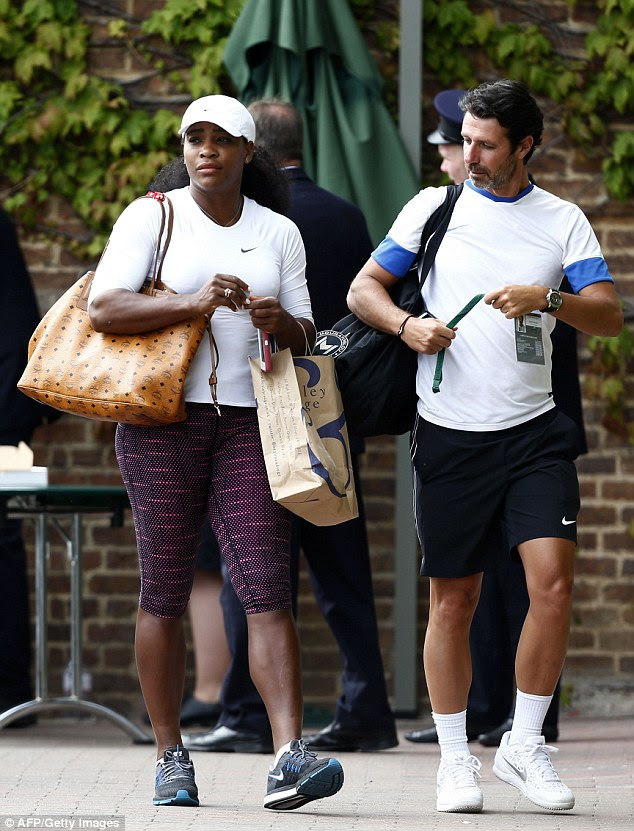 In June 2012,Williams, who has an apartment in the French capital, contacted him when she was at a low ebb. She had just lost at Roland Garros to the little-known Virginie Razzano and, having turned 30, was seeking fresh inspiration.
He agreed to take her on and the results were pretty much immediate, with her winning Wimbledon within four weeks, the Olympics afterwards and topping off the summer by regaining the US Open title.
Shortly after they were spotted in the French town of Valbonne, and a photographer snapped them walking around with their arms draped around each other. It seemed clear the relationship had taken on more than just a professional dimension.
Since he established himself by her side you rarely see the biggest inspiration of all in her career, her father Richard, on the scene. He has stepped back while Mouratoglou has guided her to seven major championship titles in the 12 Grand Slams she has entered.
His skyrocketing profile has not always brought him admirers among the large coaching fraternity in his homeland, some of whom regard him with a mixture of loathing and a little envy. 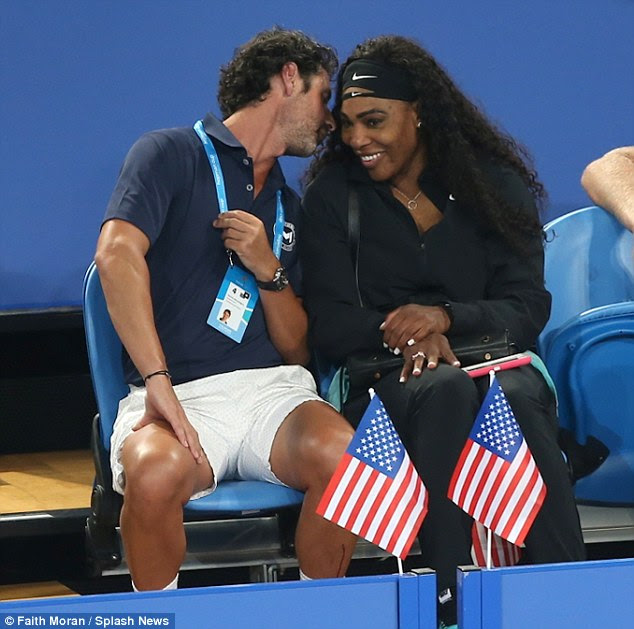 ust before Christmas last year, for example, the prominent French coach Loic Courteau — once a mentor to Amelie Mauresmo —responded to comments Mouratoglou made about the French Davis Cup team after their defeat by Switzerland in the final.
Questioning how much credit he could take for Serena’s late career achievements, Courteau told L’Equipe: ‘It’s like if I was going to buy Apple tomorrow and then said I had invented the Mac.’
But there can be no arguing about the results Mouratoglou and Williams have achieved together. Serena has lost only one match since the season-end WTA Finals last October, where she followed up a crushing group section defeat by Simona Halep to win the title.
That denied Maria Sharapova the chance of finishing the season as World No 1, which will have given Serena particular satisfaction.
Their relationship had been especially frosty since Wimbledon the previous year, when the Russian — commenting on her and Mouratoglou — said: ‘Maybe she should talk about her relationship and her boyfriend that was married and is getting a divorce and has kids. 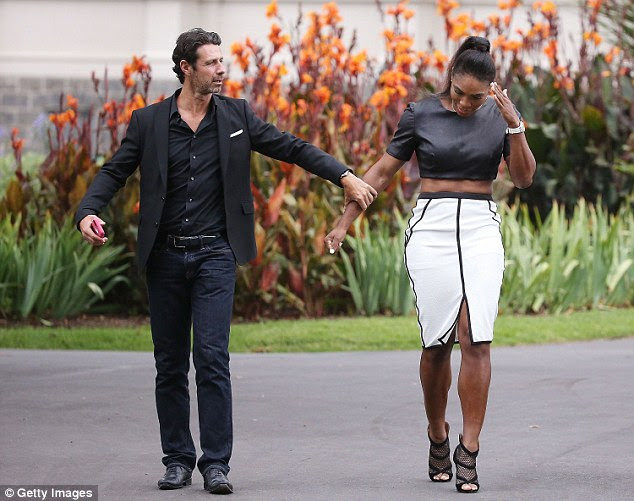 However he has done it, Mouratoglou has extracted the most sustained commitment to the sport seen from Williams, and she is clearly happy with his role. She has allowed all seven of their Grand Slam trophies achieved together to be housed in his academy. They are even said to be an item again, in all senses, and she is thriving.
Williams comes to Wimbledon this time on the back of perhaps her most remarkable Grand Slam triumph, at Roland Garros. It was brilliant, but again not without controversy as debate raged over just how ill she was over the fortnight when she coughed and spluttered her way to a series of comebacks.
Differing opinions of her physical state were most defined in the semi-final against World No 23 Timea Bacsinszky of Switzerland. Having looked out for the count at a set down, she reeled off the last 10 games to win the match. 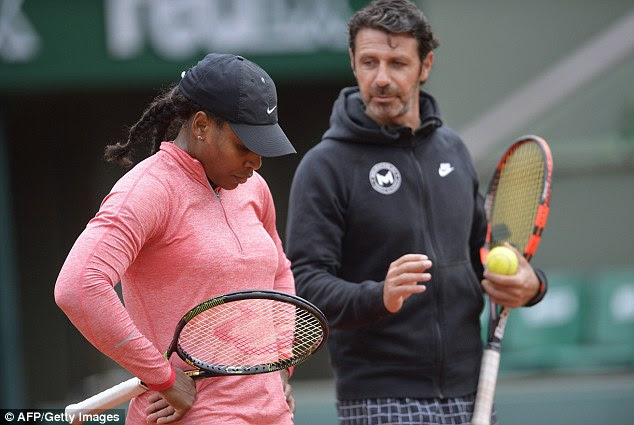 In many places, especially the US, it was largely reported as the brave defiance of physical ailments to pull off a triumph. In Switzerland the media was outraged at her on-court conduct, which it saw as toying with a far less experienced opponent.
A more neutral view was that it was the performance of a steely competitor definitely feeling under par, one who knows exactly how to push her own buttons.
In the final her pathway to another hard-fought victory involved firing herself up with tirades of foul-mouthed abuse, directed at herself.
There are many things we do not know about this extraordinary athlete but one thing remains beyond doubt — she and Mouratoglou know how to find a way to make her win.

Culled from Dailym
Posted by GISTS at 01:02