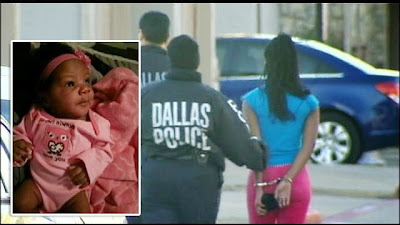 A 14-year-old Dallas girl who drowned a 2 month old baby out of jealousy was sentenced by a juvenile court judge on Friday to 40 years in custody, the maximum punishment available, after admitting to drowning the infant in January, court officials said.

The teenager will begin serving her sentence in state custody of the Texas Juvenile Justice Department. A judge will determine whether she is eligible for parole before her 19th birthday or should be transferred to an adult prison.

In a juvenile lockup, the girl will have more options than if she had been tried as adult. She will go to school and get counseling.
The baby belonged to a family friend who was in jail. Child Protective Services had placed the infant in the home of the teenage girl's mother at the request of the baby's mother, according to police.

Investigators said the girl confessed to submerging 2-month-old Justice Hull in a bowl of water because she did not want her mother to adopt the baby. The teenager's mother was at work at the time of the incident.

George Ashford, the teen’s attorney, said he wasn’t surprised by the sentence. He said the victory for his client came earlier this year when the case was not moved to adult court.