"She Is A Wicked Liar!"- Dino Melaye As He Responds To Wife On Claims Of Assault And Battery As Grounds For Divorce 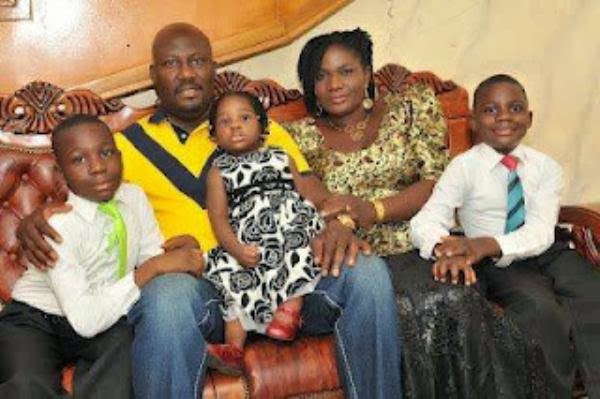 In an attempt to counter his wife's accusations of Battery and Abuse(Read HEREif you missed the initial report), ex law maker Dino Melaye has through his lawyer given his own side of the story.

It is with great sadness that this sordid situation has been brought into public domain. In an attempt to shield "the mother" of his children, Dino decided to "quietly" file for divorce and end this turbulent union. Unfortunately
"this woman" has gone all out with wicked lies even to her detriment, to try to disorganize and tarnish Dino's image.
Do we start with:
1) Violence:I challenge her to produce the so called record of abuse in any police station in Nigeria where Dino was invited and his statement taken. Nothing ever took place so nothing to report.

2) Gun to the head:
Dino has no ammunition. The gun incident was the police search and report. Her intention (after accepting money from Dino's political enemies) was to have him imprisoned under possession of illegal arms. Any reason to pin Dino down and have him jailed. This woman collected bribe to frame the father of her children. The police search in her presence revealed no possession of guns and interpreted her complaints as trivial and cleared Dino of possessing any weapon or incriminating material. The report was signed by the ACP CID, FCT command. She claimed gun was pointed at her in September but only reported a gun threat on 30th of October. Over 1month after a gun threat, laughable. This took place months ago when she no longer resided in his house. She is now presently even facing legal charges based on defamation of character and false criminal accusation.

3) Custody of kids:
Dino has always been in support of the empowerment of women both as mothers and even as entrepreneurs. He has never wanted or requested for full custody. He has always believed  young kids should be with their mothers. He is content though PAINED to see his kids only at visits fully controlled by her (Tokunbo Fabiyi). Strange as it is, this is a woman who abandoned her then ill child to go to India for cosmetic surgery on her nose,stomach and other parts. She told Dino she was on an official assignment, only to do surgery, fall into coma and fail to pay her bills. It was Dino that her family contacted and he rushed to her financial and medical aid. All these while she left her kids unattended to. Dino sent her packing after this Indian sacrilege only for her parents to run to Dino's parents in the village begging for forgiveness. Dino's father had to bring her to Abuja to beg his son who took her back. Is it her infidelity, having affairs with Dino's friends, her ex's and God knows who else? Is it the occasions she was caught by Dino giving his  possessions (watches, jewelry, etc) to her lovers?

Dino saw an ex actually wearing his watch that she claimed was stolen by the maid that led to say he was having an affair. Dino knew that Tokunbo had taken his possession to give as gifts to her boyfriends and that it was not the house girl/girls who stole. In his adamant defense of the maid/maids, Tokunbo concluded he must be having an affair. Tokunbo confessed it was only once

Dino caught her, she stole his possession to give her lovers. She even gave a brand new car Dino bought for her to her younger lover. Over the years, Dino severally removed her from their matrimonial home only for her to beg his family who insisted he forgive and taken her back especially for the kids sake.

It is public knowledge that in the recent past,she has spoken proudly and loudly of her husband's loyalty and faithfulness,now she sings a different tune all because Dino quietly decided to file for divorce after her final display of loyalty to her young lovers and inability to stop engaging in meetings with his political opposition in government. Many times even collecting gifts in exchange of info from Dino, who was then still her husband. Three months ago she was still in Ghana for a corrective surgery of her collapsed nose,where her stomach was opened and one rib taken to construct a new bridge on her nose.

We have evidence. These are all ramblings of a woman who is in apparent shock by Dino's final decision to dissolve their customary marriage. Which was never done in the Registry. Thereby legalized only by the Nigerian views of traditional and white wedding. He never took her to court to marry to her!