How Mother Of Three And Pastor Lover Murdered Husband 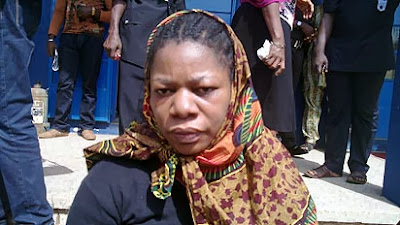 It was quite sad and a pathetic end for Mr Victor Nsongbunyo, an indigene of Akwa Ibom state and Deputy Manager at the Nigeria Petroleum Development (NPDC) Company, Benin City. The deceased allegedly murdered by his wife Mrs Enebong Victor and her Pastor boyfriend, Prince Udoka Nkanchukwu who were paraded by the Edo state Police Commissioner, Funso Adebanjo last Tuesday.

The deceased was said to have visited home to complain to both his family and that of his wife after suspecting that the current pregnancy which is being carried by the wife was not from him. Consequently, the families resolved that a DNA would be conducted after giving birth to the child. Saturday Vanguard further learnt that it was this arrangement that infuriated the wife that led her into plotting to murder her husband with her lover Pastor.

On Monday 25, the wife was said to have gone to the office to report that the husband was missing. But apparently after visiting the husband’s office, she went straight to the bank and withdrew N4milion from the husband’s account.

The wife of the deceased also went to the police to report the incident. However, staff of the NDDC was informed that people observed a burnt car and somebody inside it somewhere along Sapele Road, they quickly rushed down and found it was that of Mr Nsongbunyo. The shocked NPDC staff went back to the deceased wife at their home to inform her of the situation but found her sitting comfortably at home watching African Magic. However, detectives intensified search for the deceased new car which was given to him by the company following his promotion. The car, a Volkswagen Passat car was tracked to a compound at Ekenwan road Benin City.

Vanguard learnt that a lady was accosted by detectives in the compound and she confessed that the car was packed by a Pastor that lives in the compound. When the Pastor came out, detectives observed burns in his left hand and his face. The Pastor disclosed that one of his daughters in the church sowed a seed with the car. He subsequently took them to the residence of the deceased where it was discovered that it was the deceased wife.

The duo were arrested immediately and according to the state Police commissioner, have confessed to have committed the dastard act.  According to Adebanjo,  “what happened was that the Pastor called the deceased to come and meet him somewhere along Sapele Road, when the deceased got there the Pastor stabbed him twice and then burnt the car.

The woman gave the husband’s new car to the Pastor and we found the car with the Pastor. A 2013 model of Volkswagen car. It is a very sad and wicked act. After killing the man in his vehicle he set the car ablaze. The Pastor changed the plate number of the car and put a fake one after he murdered the man. It was when we saw the burnt in his hand that we knew that he was involved. Though he has confessed and after now we will take them to court. They both confessed that they are lovers but I believe that it was wicked on their part to have plotted the killing of the man.

Mrs Isonguyo who denied she was having extra marital affairs with the Pastor, narrated that “when I did not see my husband I ran to the Pastor because we have known for a very long time. I took my husband’s new car to him to sow a seed in the church so that my husband will be found. I told him to take it to the church but I don’t know that he went and changed the plate numbers. I had to ask him to pray harder because I love my husband and I don’t want anything to happen to him.

I did not kill my husband because I loved him. I brought the car and told him to take it to his church and sow a seed that I want God to answer my prayers so that my husband will come back. I told him to take it to the church because even if it is a house I would have taken it to sow a seed for my husband to come back. I gave it to him but what I did not know was that he went to change the plate number and other papers that have to do with the car.

I was lying down in the house at about 11pm that day when the police came and arrested me”. Asked if she is having extra marital affair with the Pastor, she asserted “ God forbid, I have not had any affair with the Pastor. The Pastor has been a close family friend and we always give him cloths to go and share in the orphanages. And even when I travelled with my husband we gave him our ATM card so that he can take care of our poultry and whatever that is needed to be done. He has been very honest to us so I don’t know what is happening”.

She further denied having quarrel with the late husband, asserting that “Until I came to this place nobody told me that my husband is dead. I pray that God should intervene because I have never committed any crime before in my life. I want God to intervene in this matter. I have three boys for my husband, 17, 16 and 15 years”.

In his confession, Pastor Ukachukwu whom Vanguard learnt has not been to their church, Land of Evidence Church along Airport Road Benin City, said he kicked against bringing the car to him by the deceased wife but decided to accept it when she insisted that she wanted to sow a seed. According to him “I have been a family Pastor and sometimes I pick their children from school.

She called me and said that she wanted to give me a car to sow a seed in my church. When she even brought the car I asked her why she should bring the car in the middle of this crisis but she said her husband is worth more than any material thing that she can make any sacrifice for her husband. I changed the plate number because any gift for Pastors you have to change it in order to be able to drive the car”. CP Adebanjo said the duo would be charged to court for murder.

Culled from Vanguard
Posted by GISTS at 13:31