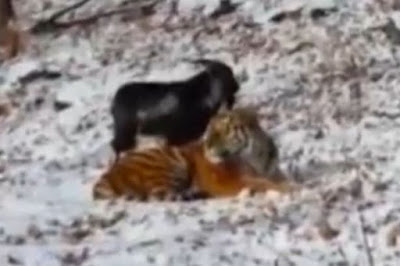 When God says it’s not yet time for you to die, lol. When staff at a Russian safari park placed a goat inside their Siberian tiger's enclosure, they presumed that would be the last they saw of it.

But instead they've been left scratching their heads after the big cat's intended lunch instead became his BEST FRIEND. What's more, the supposedly killer animal has let the goat have its BED.

The unlikely friendship blossomed at the Far Eastern Safari Park at Shkotovsky, in the Primorsky region.
The tiger, named Amur, is used to killing and eating goats, as he is fed one twice a week. But this one brave goat has somehow managed to survive four days without being troubled by the usually carnivorous predator.

"We think that the goat never came across tigers and no-one taught him to be scared of them," said one of the tiger's keepers.
"He kicked the tiger out of his bedroom and is sleeping on Amur's 'bed' for the fourth night."

Keepers have now named the goat Timur "out of respect for his bravery".

"He was just a nameless prey at the point when he entered the cage," the keeper said. 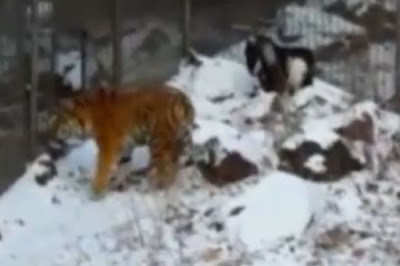 Playing inside the tiger's den.... 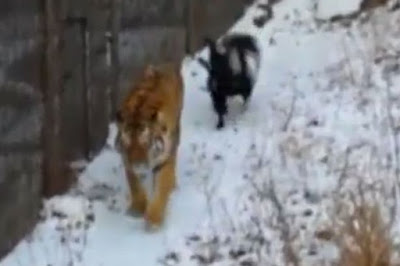