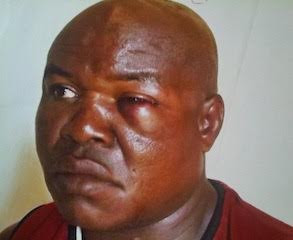 Prophet Destiny Onwudinjo, a pastor of Heaven Divine Ministry, in Shasha, who was in April this year sentenced to 7 years imprisonment after he tried absconding from court during proceedings has committed suicide inside Kirikiri Prison.
Destiny was arrested and charged to court in April after brutalizing a commercial motorcycle rider, Chika Izuogu pictured above for refusing to pay him N120,000 for deliverance prayer.

Pm news reports that Destiny died from injuries he sustained after he banged his head against the prison gates in his bid to kill himself.

His fellow inmates in prison say Destiny had always felt dejected ever since he came into prison and committed suicide due to frustration. While giving their account of how he died, the inmates said he hit his head several times on the prison wall and his head broke. He later fell down and bled profusely.
He was rushed to a hospital where he was confirmed dead on arrival.