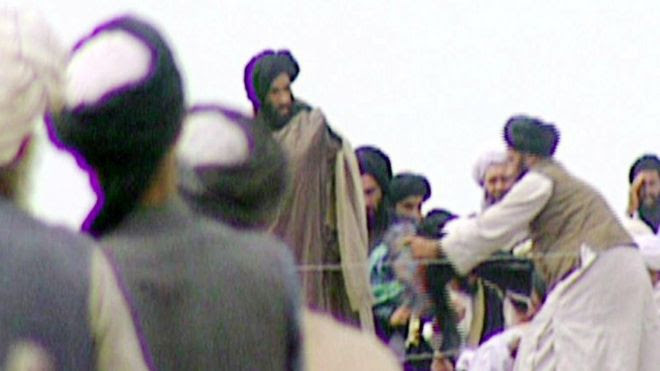 The Afghan government is investigating new reports that Taliban leader Mullah Omar has died, a spokesman said.
The Taliban has yet to comment on the claim, which was made by top sources within the Afghan administration and intelligence agency.
The sources said the reclusive militant leader had died two to three years ago.


The latest claims of Mullah Omar's death are being taken more seriously than previous such reports. The Taliban is expected to issue a statement soon.
A spokesman for Afghan President Ashraf Ghani said on Wednesday that the authorities were trying to verify the reports.
"As soon as we get any more authentication... we're going to let the media and the people of Afghanistan know about that," Sayed Zafar Hashemi said.
The Afghan government, elected last year, has embarked on a peace process with the Taliban.
A security official in Pakistan, the country hosting the talks, told the Associated Press news agency that the claims of Mullah Omar's death were mere "speculation", designed to destabilise the negotiations.
Taliban spokesman Qari Yousef Ahmadi, quoted by Sky News, said that Mullah Omar was "still alive and leading the movement".
But a second spokesman, Zabiullah Mujahid, told the BBC a statement would be made in the coming hours.
Mullah Omar led the Taliban to victory over rival Afghan militias in the civil war that followed the withdrawal of Soviet troops.
His alliance with al-Qaeda leader Osama Bin Laden prompted the US-led invasion of Afghanistan in 2001, in the aftermath of the 9/11 attacks on New York and Washington.
Mullah Omar has since been in hiding, with a $10m (£6.4m) US State Department bounty on his head.
Over the years, the Taliban have released several messages purported to be from the fugitive leader.
The latest of these statements, from mid-July, expressed support for the peace talks between the Taliban and the Afghan government.
However, the message was in the form of a text published on a Taliban website, rather than an audio or video recording - fuelling rumours that the leader was dead or incapacitated.
The failure to prove that Mullah Omar was alive was a major factor behind the defection of several senior Taliban commanders to the so-called Islamic State group, according to the BBC's former Kabul correspondent, David Loyn.
BBC
Posted by GISTS at 05:47