Satanic cult cannibal who baked his victims in meat pies 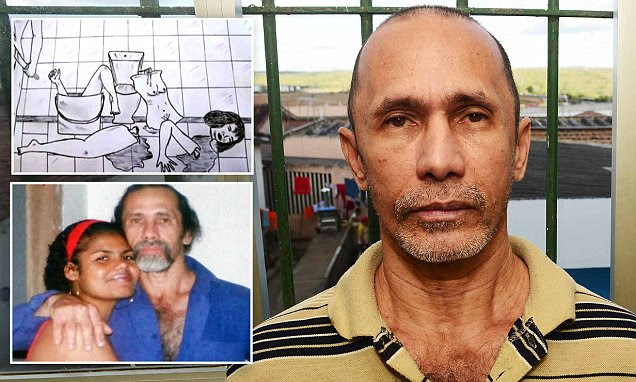 Jorge Beltrao Negromonte, 54, from Guaranhuns, Brazil, was jailed for 23 years for his part in sick cult. With his wife and mistress (together bottom left), he killed three women and stripped their flesh before eating 'the beef' to 'purify' their souls of sin.
His wife sold some of the meat in pies on the street - and it is feared that even the local police chief, who was a fan, may have eaten human flesh. In his first ever interview, the well-educated former university lecturer, who kept licking his lips throughout his encounter with MailOnline, showed no remorse for his crimes. Negromonte said his cult wanted to purge the world of uneducated women who only gave birth to 'thieves and low-lifes'. But the real reason may be the burning resentment he had that he couldn't have children of his own. And they kept the daughter of one of his victims as their own child, and fed the toddler his mother's meat. The schizophrenic claims that he doesn't remember killing the women, apart from flashes of blood, knives and screams but he documented the gruesome murders in his own sick book (top left).
Posted by GISTS at 10:59