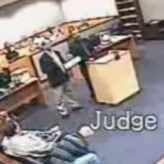 A fight between a judge and a public defender broke out in a courtroom in Brevard County Florida on Monday.
Judge John Murphy was allegedly trying to get public defender Andrew Weinstock to waive his client’s right to a speedy trial.


Video footage shows Murphy telling Weinstock, “You know, if I had a rock I would throw it at you right now. Stop pissing me off. Just sit down.” Weinstock responds, “You know I’m the public defender. I have a right to be here and I have a right to stand and represent my client.”
Murphy then invites Weinstock to go out to a hallway in the back so they could settle their dispute with fists. Murphy is heard saying, “If you want to fight, let’s go out back and I’ll just beat your ass.”
Public defender Blaise Trettis said Weinstock thought Murphy just wanted to talk, but was unpleasantly surprised. Trettis told WFTV, “The attorney said that immediately upon entering the hallway he was grabbed by the collar and began to be struck. There was no discussion, no talk, not even time for anything. Just as soon as they’re in the hallway, the attorney was grabbed.”
Deputies broke up the fight and Murphy went right back into the courtroom and finished up. Murphy was not charged with anything, but the incident will be reported to the Florida Bar Association.
Yahoo News