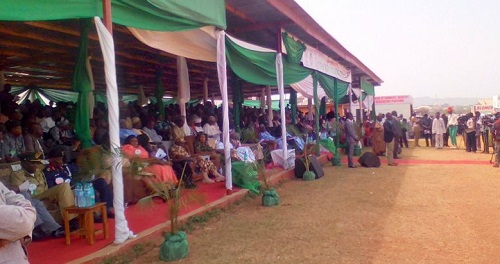 One of the young workers, who refused to give her name, said the illicit trade was booming because the cold weather in the city made exhibitors and visitors from outside the city disposed to their services and other available forms of hospitality.


She said the charges ranged from N1500 to N2000, “depending on the personality of both the man and lady”. She added, “as a lady, if you appear shabby, people will price you cheaply.”

Illicit trade in sex is however not the only odd business noticed by our reporter at the venue of the event on Thursday night.

Officials issuing ticketing at the gate increased the fare to N200, even though the tickets still bore the official price of N100.

Some of the officials were also noticed giving free passage to some visitors, especially ladies.

The trade fair was declared open on October 18 by the deputy governor of Plateau state, Sonni Tyoden. It will run until Thursday next week.

At the opening ceremony, Mr. Tyoden assured participants of security in the state.

Bulus Dareng, the president of the state chamber of commerce, industry, mines and agriculture (PLACCIMA), who are organizers of the trade fair, said the products being exhibited by both local and foreign exhibitors had been certified by the Standards Organization of Nigeria, SON.

Mr. Dareng said the participation of foreigners at the trade fair will boost the economy of Nigeria.