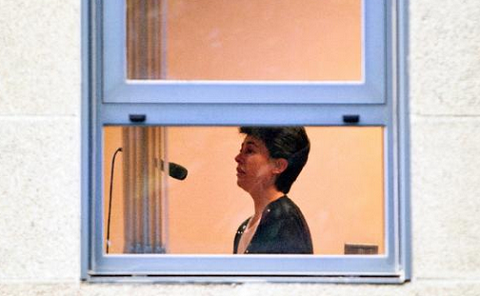 A Spanish lawyer suffocated her 12-year-old adopted Chinese daughter in a plan hatched with her ex-husband, a public prosecutor told jurors Thursday as the couple's high profile trial wrapped up.

Rosario Porto, a former lawyer, and her ex-husband, journalist Alfonso Basterra, were charged in 2013 of murdering Asunta Yong Fang Basterra Porto, whom they adopted when she was a baby.

The couple are accused of drugging Asunta with the sedative Orfidal periodically for three months and finally asphyxiating her on September 21, 2013. They have both denied the charges.
Up until now the authorities accused the parents of acting together.

But in his final arguments to the court prosecutor Jorge Fernandez de Arguiz said Porto, 46, suffocated Asunta on her own in a plan developed with her ex husband.

"He said he thinks they divided up the roles," Porto's lawyer, Jose Luis Gutierrez Aranguren said.

Prosecutors have asked that both Porto and Basterra each get prison sentences of 18 years.

At the time of Asunta's death, the couple were separated but say they were raising their adopted daughter together.

The trial was scheduled to wrap up on Friday. The nine-member jury will begin deliberations on Monday.

Over 100 witnesses and experts testified at the trial, which got underway at the end of September.

The case shocked Spain and drew international attention when it came to light, prompting a statement of concern by the Chinese foreign ministry.

During the trial Porto told the court that she had been suffering from depression that year and had herself been taking the sedative Orfidal.

When prosecutors showed her photographs of Asunta's corpse, Porto burst into tears, Spanish media in the courtroom reported.