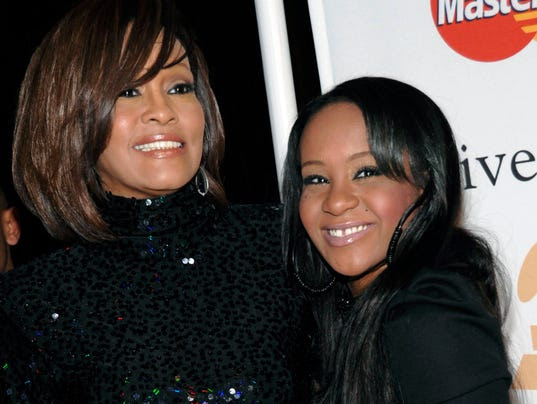 , the little-girl-lost daughter of the late, legendary , died Sunday in an Atlanta-area hospice, nearly six months after she was found unconscious in her Georgia home. She was 22.
She never regained consciousness to explain what happened before she was found Jan. 31, face down and unresponsive in her bathtub.
"It is hard to say goodbye. On Sunday, July 26, Bobbi Kristina Brown made her transition peacefully," said a statement posted to Whitney Houston's Facebook page. "The family thanks everyone for their loving thoughts and prayers. As Bobbi Kristina would say: 'The wind is behind me and the sun is in my face.' "
"She is finally at peace in the arms of God," the Houston family told USA TODAY in a statement. "We want to again thank everyone for their tremendous amount of love and support during these last few months."

She had spent the last months in two Atlanta hospitals, a medical rehab facility and a hospice, much of the time in an induced coma and on life support.
Her Houston family relatives announced last month that she had been transferred to hospice, a move usually reserved for end-of-life care.
"Despite the great medical care at numerous facilities, Bobbi Kristina Brown's condition has continued to deteriorate," said a statement signed by Pat Houston, Bobbi Kristina's aunt, the executor of Whitney's estate. "As of today, she has been moved into hospice care. We thank everyone for their support and prayers. She is in God's hands now."
By the afternoon of June 25, police and media cars and vans were seen parked outside the hospice as her family, including father Bobby Brown and Pat Houston, gathered by her bedside.
Her death, coming three years after her mother's eerily similar demise, marks a double tragedy, one of the most heartbreaking of the celebrity world.
Krissi, as she was known, was found by her live-in boyfriend, , and their friend Max Lomas, face down and unconscious in her bathtub at her , home.
Lisa Holland, a spokeswoman for the Roswell Police Department, said Brown was given cardiopulmonary resuscitation until rescuers arrived. A police statement said Gordon "started CPR and a police officer took over lifesaving measures until an ambulance arrived."
It is still not clear what happened to her or why. Police have been investigating the circumstances but have not announced their findings nor charged anyone with anything.
In late June, Fulton County District Attorney Paul Howard said he had the police case file and was reviewing it with "greater interest" given the move to hospice.
Meanwhile, the conservator for Bobbi Kristina filed a lawsuit against Gordon, accusing him of beating her up the day she was found, and stealing $11,000 from her account afterward.
Bobbi Kristina was "unresponsive" when discovered and remained so. She turned 22 on March 3, 2015, still unconscious.
She was first taken to the North Fulton Hospital in Atlanta and later was transferred to. She was placed in an induced coma and kept on a ventilator as her family gathered at her bedside.
In March she was transferred to a nearby medical rehabilitation facility, but her condition remained unchanged, according to her grandmother, gospel great . She said doctors told her Bobbi Kristina had suffered "global and irreversible brain damage" and that her condition remained unchanged despite intensive treatment.
Although much about what happened before she was found remains murky, it's known that she was in a car crash four days before. She was driving with a friend in Roswell when her Jeep Liberty blew a tire and she lost control, causing her to cross into oncoming traffic and collide with another vehicle. 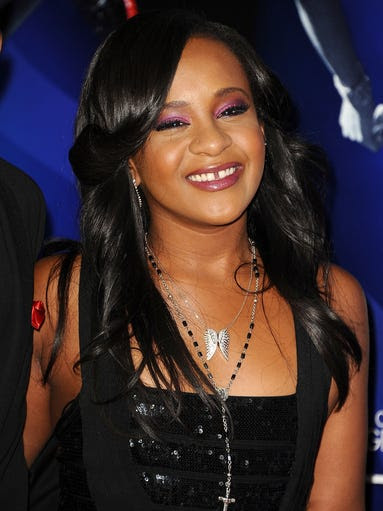 Her friend and the driver of the other vehicle were hospitalized with serious injuries.
Bobbi Kristina's tragedy echoed the circumstances of Whitney Houston's tragedy: The 48-year-old former superstar was found dead in a bathtub at the  hotel on Feb. 11, 2012.
Authorities examining Houston's death found a dozen prescription drug bottles in the hotel suite. They concluded that Houston accidentally drowned. Heart disease and cocaine use were listed as contributing factors in her death.
The 48-year-old singer had struggled for years with cocaine, marijuana and pills, and her behavior had become erratic.
Daughter Krissi butted heads with family members after her mother's death over her inheritance, her relationship and other disagreements, and tweeted often about missing her "mommy."
Often seen as headstrong and determined to make it on her own in the music world, Krissi, who was born in Livingston, N.J., grew up with two parents who battled demons including drugs and alcohol during their 14-year-marriage, which ended in 2007. Their stormy union was documented in the 2005 Bravo TV reality series Being Bobby Brown.
Krissi then went on to be shown drinking on-camera during the filming of the 2012 Lifetime special, The Houstons: On Our Own.
At the time, Pat Houston told  that there was nothing wrong with it. "Cameras have been following since she was born. It's not exploitation of any kind.
In 2013, Cissy Houston addressed how her daughter's death continued to adversely affect her granddaughter.
"Of course I worry about her," Cissy told People. "It doesn't mean that she is going to follow her (mother's) same path. She could but anybody could. I don't want to jinx her. I'm trying to make sure she doesn't."
While living in Atlanta with Gordon, Krissi had more troubles. In 2013, the two were evicted from an apartment after multiple noise complaints from a neighbor.
Last year, Bobbi Kristina launched an angry Twitter rant against director  for not including her in the Whitney biopic for Lifetime.
Krissy was in the lobby of the Beverly Hilton when word came that her mother had died upstairs.
Culled from USA TODAY
Posted by GISTS at 20:10