Journey To Libya: How I Was Forced Into Prostitution- Abducted 15-Year Old Girl Narrates 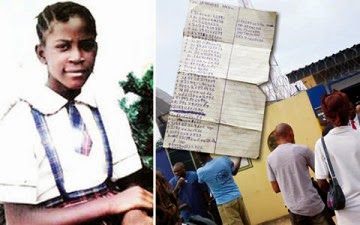 Precious Nwaigwe, the 15-year-old schoolgirl, who was kidnapped in the Ajah area of Lagos State about a year ago, has said she was made to work for $6,000 the Libyan pimp paid to buy her.

She added that after paying the money, she was again used as collateral for a 500 Libyan dinars (N50,000) loan.

She also stated that her abductors conducted pregnancy tests on her three different times, which were negative.

The schoolgirl, who was released on Friday, spoke to Punch Metro on Monday in Ikeja, Lagos.

She said she saw more than 1,000 Nigerian girls, who were also forced to work for the money paid by the pimps to the human traffickers.

Our correspondent had reported how the victim was kidnapped in May, 2014 while returning to her school, Ikenne Community College, Ikenne, Ogun State.

Her parents were said to have been contacted by the kidnappers in the Niger Republic, about two months after, demanding $100,000 (N19.9m) as a ransom.

Policemen from the State Criminal Investigation Department, Yaba, and the Special Anti-Robbery Squad went to different parts of the country to arrest suspects.

A principal suspect and cousin of the victim, Kelvin Okito, was said to have eventually made a call to his accomplices in Libya, asking them to free the victim.

She returned to Lagos on Friday.

Precious said she would never forgive her cousin for betraying her trust.

She said she was actually abducted in Ode Remo, Ogun State after she stumbled on some cultists en route to her school in Ikenne.

She said, “When I left Sangotedo Park in Ajah for school, I was the only one in the vehicle, so the driver dropped me off at Ibeju Lekki.

“I got another vehicle from there, which took me to Ode Remo around 9pm. I could not find a cab that would take me to Ikenne where my school is. I did not know they were having a festival that day and people had been asked to stay indoors.

“I trekked for about two hours until I stumbled on some people who were talking. I discovered they were cultists and they accused me of eavesdropping. They added that I knew their secrets. The ladies among them descended on me.

“After the ladies were done beating me, they asked the men in the group to take turns to rape me.”

She said she faintly heard a man in the group protesting the decision.

She said the man, who she later identified as Seun, took her to Ojota in Lagos.

She said Seun took care of her for two weeks, while she recuperated from her injuries.

Precious added, “One day, he said he wanted to help me to get eyedrop because my eyes were swollen. I begged him to allow me to follow him, at least to see the sun.

“He obliged me and while we were going, my slippers cut and I went back into the house to pick another one. I was on my way when I saw Kelvin (Okito) my maternal cousin.”

The Ohaozara, Ebonyi State indigene, said she narrated her ordeal to Okito, thinking that he would rescue her.

Punch Metro learnt that Okito, however, took her to the Alaba area of Lagos and connived with his friend, John, to sell the 15-year-old to John’s elder brother, identified as Nzube Chukwu.

Chukwu was said to be based in Libya.

She explained that Okito deceived her that he had discussed with her mother to take her to Libya where she would continue her education.

She said, “He said he had called my mum and told her he was taking me on a journey to Libya. I pleaded with him to allow me talk to her, but he said my mum was happy that I was going to Libya, where I would continue my education.”

She said together with some other migrants, they spent four days on the road before reaching Agadez in the Niger Republic.

She said at that point, her co-travellers told her that it was a journey of life and death.

She said, “We spent four days on our journey to Agadez in the Niger Republic. The other people with me said it was a journey of life and death. I managed to get a phone, called my mum and asked her for money so I could return to Nigeria.

“They discovered the phone that I used to call my mum and they seized it. I was made to stay indoors in Agadez for three weeks.”

She said they later started the journey to Libya and spent seven days in the desert, adding that some people died on the way.

“We got to Bra in Libya seven days after. I met the wife of the man (Chukwu) and she asked me if I had been told what I was there for. I said, ‘Yes, to continue my school.’

“I was taken to a place where there were so many girls wearing only pants and bras. I told them to wear their clothes. But they laughed at me and said, ‘this one is a JJC (naive)’,” she added.

Precious said the woman told her she had bought her and she must work to pay back the money.

Punch Metro learnt that the woman told her she would pay $6,000, including transport, accommodation and feeding costs.

She said when she did not cooperate, she was beaten up.

“Every night, they would torture me with cigarette stubs. They locked me up in a room and beat me up,” she added.

Our correspondent learnt that the practice in the area was that every day’s job was documented in a notebook.

At the end of the month, the total money made by each of the girls would be tabulated and divided into two.

The money would then be shared ─ one part for accommodation and feeding, and the other for transport cost incurred while travelling down to Libya.

Precious said she had pleaded with a man that had indicated interest to sleep with her on a night, to allow her make a call with his phone.

She said she called Okito and told him she was suffering, begging him to talk to the woman to allow her go.

Okito was said to have assured the 15-year-old that he would do something.

She said, “But I paid the money back on my own. The man (Chukwu), who sold me to the woman, then came back and started making trouble again.”

She said she was relocated to another part of the town, Baladia.

Precious said she was accused of sleeping with Chukwu and was subjected to three pregnancy tests, which were negative.

While working to raise the 500 dinars, she said she met a Nigerian named Soni (Sunday).

The two were said to have become friends.

Punch Metro was told that policemen at the SCID and SARS, in the course of investigations, arrested John and Okito in Lagos.

John’s brother, Chukwu, was said to have threatened Precious that she would not be allowed to return to Nigeria until the police in Nigeria released John.

However, Soni helped the victim to pay the money and insisted that the victim was no longer in captivity and Chukwu could not decide her fate.

Punch Metro learnt that Soni, who worked as a tiles contractor in Libya, arranged Precious’ transport to Lagos.

She told our correspondent that while preparing to return home, the pimp in Libya urged her to recruit girls from Lagos.

She said, “She told me that now that I have seen how she worked and made her money, she would want me to join the business.

“There were more than 1,000 Nigerian girls who had been recruited to work in Libya.

“I was lucky to have survived and returned home safely.”

She said when she arrived in Lagos, she contacted a relative in the Okota area of the state, who took her to her parents.

“I can never forgive my cousin who did this to me.

“I trusted him and he decided to sell me for money,” she said.

Our correspondent learnt that the victim would not return to her school in Ikenne.

Her father, Okoro, said he was happy that his daughter returned home alive.

He said, “There were four people involved in this sad tale and they were my town’s people.

“I spent more than N3m to get my daughter back. I was close to selling my house.”

Her mother, Blessing, commended police, The PUNCH and other Nigerians for their support.

The Police Public Relations Officer, Kenneth Nwosu, said the suspects would soon be taken to court.
Posted by GISTS at 00:15