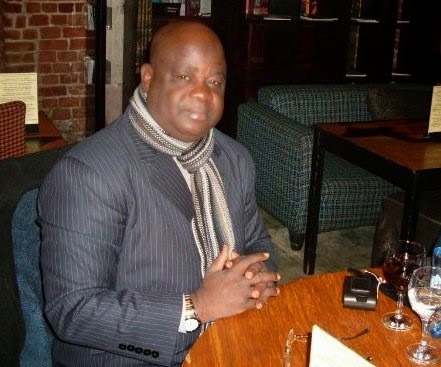 Dr Oyinwola Oni, a Lagos based DNA expert says that 40% of men do not know that they are not the biological fathers of their first child. Dr Oni said this while sharing his experience on how a former girlfriend wanted to force a set of twins on him. What he told City People below is quite interesting.

"How I got into doing DNA is an interesting story which all man should learn from. I lost my wife about 6 years ago. About that time there was a lady I have known for  long in Nigeria but who now lives in the UK. I now said I will be in Germany on so,so date , can you come and see me? She came in November and we were together for four days. She left. I left. I got back home. I lost my wife four weeks after that. Then she became pregnant. She didn't tell me. She didn't tell me. She waited for a year. After a year, she said she just wanted me to know what she did in Germany, that she now has twins for me-a boy and a girl. I said now that I can't say anything. I am bereaved.
Give me time. How do you want my in-laws to react. Do you know at the 1st year birthday, I was in London with a friend. We did one year birthday for the kids. They were pulling trolleys around with the baby. After 2 years I bought her a car. After 4 years of loosing my wife, I now said let us now review the situation and see whether we can marry. As God will have it, I knew in my mind that I will do DNA before I marry her. Infact, we were even getting a room ready for her in my house. The carpenter was working. She was in the UK dictating what she wanted. I traveled to the UK. I carried her mother. Before I left, I told my brother this is what is happening. I am going to carry this woman to go and DNA if these children were mine. I will now ask them to come for the Ileya festival. We got there she was happy. I took her sample, took the children's sample. We submitted the sample at the DNA center. We went to Italy together. We went for dinner together. Then I came back. When she was going home one night, I said let me check my mail. I did. The result of the DNA had come. I was not the father of the twins. Haa! I failed with 0%. If not for the medical lab scientist, those children will be in my house now, with me thinking they are my children. I can tell you this happens to so many men. Do you know that 40 percent of most of the 1st born don't belong to their so called biological fathers, all over the world. Reason? Most of there ladies often have one or two boyfriends"he said

Asked why the woman decided to con him into believing he fathered the children, he said

"I told her, lady from the result, I am not the father of your kids but I will help you. I explained to her, we met in November, you gave birth in August, perfect. That is the time. You can't force that on any clinical person. Any pregnancy month minus 3 will give to the AAA. We got 9(Day 9). I asked her a few questions. So how come? She was to confess to me that because I said she should take the next available flight from Heathrow to Cologne, the first flight was 6pm and where she was, was very far. She had to stay with a male friend that was living close to Heathrow and that was her day 10. She said one thing led to another and she had sex with the guy. She came to meet me on the 11th and she ovulated around that period. She didn't know. Atimes women know, atimes they don't. A woman ovulates only one day in a month and it last for about 10 hours. And sperm can stay in a woman for 48 hours. So a lady can have 2 to 3 types of sperm in her system and when she now ovulates, any sperm that is fertilised can immediately hit that egg. That was what happened to her. So, the sex she had on the 9th of that month, the sperm was still there till 11th when she now ovulated. Before we met on the evening of the 11th, the egg had been fertilised. There are so many homes where they have this kind of problems"